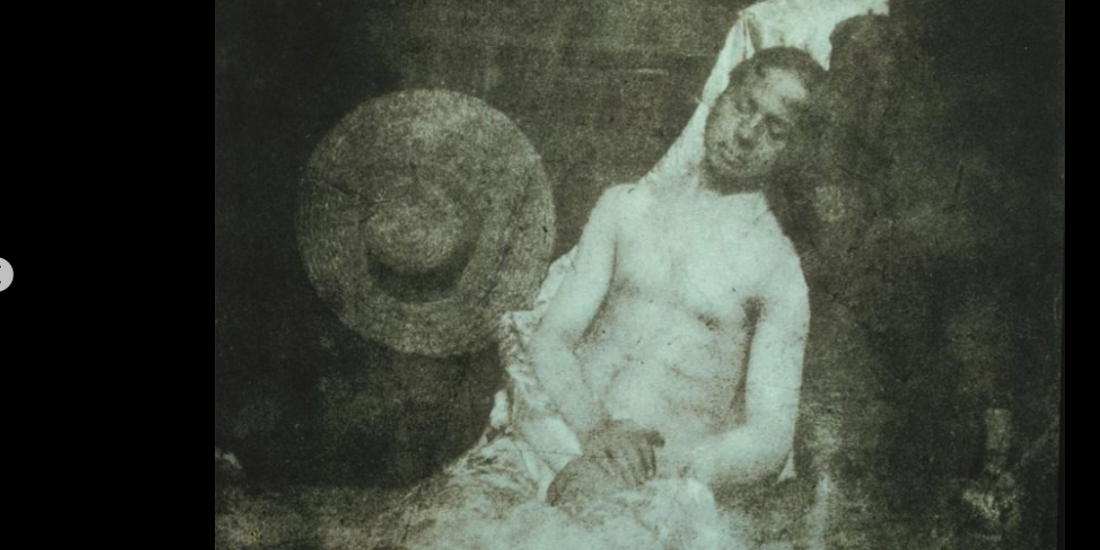 My project is taking me to some interesting places. It has got me thinking about reality, who, what and even if, I am, whether there is any such thing as a self and what truth and beauty means in photography. Turning a camera on me is also proving therapeutic as it gets me to look at the external surface of me and things around me and allow me to challenge what my internal state appears to be to me.

Self portraiture has to be a first place to look to explore what I can discover about me with a camera. The image below is one of the first declared self portraits that actually turned out to be an early example of fake news. Attached to the back of this image is a suicide note signed by Hippolyte Bayard in 1840. He was outraged that his delay in registering his discovery of the photographic process lead to fame and acclaim for Louis Daguerre and no money or fame for him. This was his protest but in fact is an image of a drowned sailor taken by Bayard himself. source

Since this photograph self portraits have remained an inquisitive and active genre in photography. It is a fascinating quest as ‘the author of a self portrait…..can never mimetically represent the physical reality that other people see. The ‘self’ is always in some respects also an ‘other.” (Bright. 2010:8).

I met Elina Brotherus at PhotoEspaña in Madrid. She is famous for taking photographs of her(self) in multiple different constructed scenarios. I asked her if she ever felt any of her images were more or less representations of her. She replied that none of them were her. She did say her friends often commented on which images were or were not her. As I looked at her in the flesh and looked to images on the wall around her it is easy to see how I get confused about what I am seeing.

Susan Bright says…’When we look at a photographic self portrait we do not see an individual or a visual depiction of an inner existential being, but rather a display of ‘self regard, self preservation, self revelation and self creation’ open to any interpretation imposed upon it buy each individual viewer. (2010:9) This is something I have been struggling with and wish to explore further. Is it possible to convey an inner state of mine through a surface image.

In the two images that follow I am smiling. In one my inner state was happy and in the other it was very sad and black. Even though I know which is which it is difficult for me to show you how the external image shows that inner state. I have shown these images to a number of people who say ‘you can always see in the eyes.’ So far more than half of those people choose the wrong picture for a particular inner state.

Claude Cahun (1894-1954) said ‘under the mask is another mask…….the real self can never be revealed because it is performed – a role rather than a truth.’ (Bright. 2010:16). I agree with this as we are never a finished discrete describable entity but an ever changing continuum. Within that is the conundrum that in the way we understand time to flow all there ever is is ‘now’. This gets philosophically and psychologically demanding and wishing we could get back to simpler times when we could say ‘I think therefore I am.’

To any normal person and a none academic me there is something in a self portrait of me that is about me. Apart from looking at me it is the closest we can get to indexical evidence, for you and for me, that I exist. Susan Bright captures the essence of the self well when she says the self is ‘all pervasive but also elusive, hidden, collaborative, duplicitous, camouflaged, constructed, disguised, discursive and fleeting, always present but impossible to pin down.’ (2010:21). Always present but impossible to pin down.

Susan Bright’s book ‘The Self Portrait in Contemporary Photography’ covers the themes of autobiography, body, masquerade, studio, album and performance. My conclusion is that the many forms of self portrait have been well covered and offer me some approaches to consider within The Truth & Beauty of Me.

An image alone or even a set of images is never going to fully capture ‘me’. This statement is harmless and tautological in a way as quite possibly there is no such thing as ‘me’ other than that created and ever changing in my head. But all is not lost. Photographs do say something and do have a tale to tell. The next steps in my project are to be clear about what story I wish to tell and which photographic approaches provide the clearest evidence of that tale. Self portraits will form part of the work.

A final thought is that as I have explored other photographers work I do project on to their images something of what I want to achieve with my work. Sally Mann’s 1000 Crossings of the Mississipi have many images of her and her family that appear to show an inner state. Similarly David Heath’s Dialogues with Solitudes does somehow get across how lonely some of his subject might (?) be. Alex Soths Sleeping By the Mississipi is both a beautiful book to caress but again gets something across about the inner state. These are all my projections on to these images but somehow the photographer has successfully managed to evoke these projections in me and in many others. Even if that might be a performance as Cahun says!

Bright, S. The Self Portrait in Contemporary Photography. 2010. Thames and Hudson.